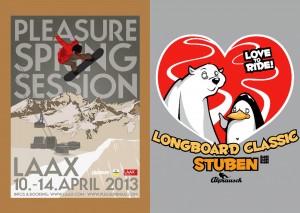 Last weekend snowboard hippies from around the globe pilgered either to the Pleasure Spring Session in Laax or the Longboard Classic (LBC) in Stuben am Arlberg. The daily shaped park setup and perfect spring riding conditions in Laax and the massive snowbase and fresh powder in Stuben called our attention likewise, making a decision for just one of those events impossible. Hence we ended up rolling into Laax and Stuben within four days. Mani, Pi and I spent Thursday and Friday in Laax, shreding the perfectly shaped pipe and superfun park/slope run down Crap Sogn Gion. Crashing at the Capricorn made our stay a very pleasant one. You would be surprised how those folks deal with the non-smoking law enforcement. On Friday eve we met up with Alex, Dave, Jrene and Mure in order to go to Stuben. After some nice slashes and a decent powreset on Saturday morning the chinese downhill went down at around noon. Alex and Pi performed as conducted and got 2nd and 3rd just a couple of meters behind Chris who claimed the win for the subsequent time in the no school category. Just a couple of meters behind them I stumbled across the finish line as well, making it on the 5th. After a raging party on Saturday eve we made our way back to Laax for some amazing afternoon park and pipe shred. The extended four day weekend was a blast, containing memorable times with great people, best versatile snowboarding and happy, smiling faces all over the place. See you next year.